“Camden was originally an accident, but I shall never be sorry I was left over in Camden. It has brought me blessed returns.”
-Walt Whitman

In 1884, Walt Whitman purchased a modest two-story frame house on Mickle Street for $1750. It is the only house he ever owned. He lived there until his death in 1892, at the age of seventy-two.

He had come to Camden years earlier, in 1873, and lived with his brother George on nearby Stevens Street. By this time, Whitman’s international reputation attracted the attention of the days most prominent literary figures. Among them, Bram Stoker and Oscar Wilde came to Camden to visit America’s greatest poet. 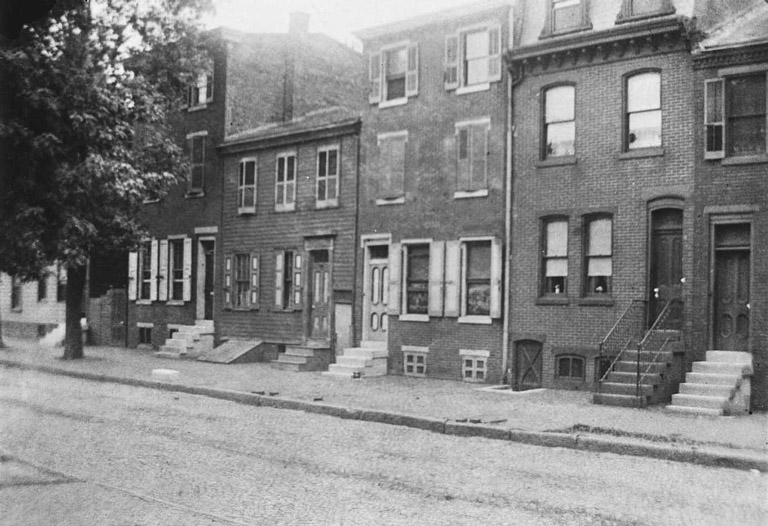 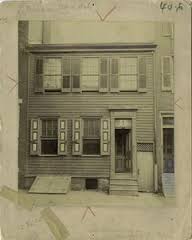 When George and his wife Louisa decided to move to rural Burlington, New Jersey, Walt chose to stay in Camden. With the surprising success of the 1882 edition of Leaves of Grass Whitman was able to purchase his own home. He soon met Mary O. Davis, the widow of a sea captain, who was renting a house on West Street. The aging poet proposed that she move into his empty house with her furniture, rent free, and keep house for him. He would provide the living expenses and pay her a small salary. Mrs. Davis moved in and remained with Whitman until his death on March 26, 1892. Whitman referred to Mary as his housekeeper and friend.

During his years in Camden, Whitman became a friend of the Philadelphia artist, Thomas Eakins. These two giants of nineteenth-century American culture found much to admire in each other’s work. Each in his own medium broke with conventions, creating something new and distinctly American. Eakins photographed Whitman and painted his portrait.

Today the Walt Whitman House, a National Historic Landmark, provides an intimate glimpse into the life of the poet, attracting visitors from around the world. Whitman’s original letters, personal belongings, the bed in which he died, and the death notice that was nailed to the front door have all been preserved, as well as a collection of rare nineteenth-century photographs, including the earliest known image of Whitman – an 1848 daguerreotype.

I CELEBRATE myself
And what I assume you shall assume
For every atom belonging to me as good belongs to you
I loafe and invite my soul
I lean and loafe at my ease….observing a spear
of summer grass.
~Walt Whitman

With these lines, a then unknown Walt Whitman introduced himself to the literary world of his day. In 1855, at his own expense, he published a book called Leaves of Grass. Of the 795 copies printed, almost none were sold. But in time, this small book, just 95 pages long, would alter the course of world literature.

During the first half of the nineteenth century, Americans looked for signs of an emerging cultural style distinct from European precedents. American artists flocked to Niagara Falls to capture on canvas a sight that was truly American.

“For it is not metres, but a metre-making argument, that makes a poem, – a thought so passionate and alive, that, like the spirit of a plant or an animal, it has an architecture of its own, and adorns nature with a new thing.”
~Ralph Waldo Emerson, “The Poet” (1844)

Whitman sent Emerson a copy of the new book and received the following reply:

Dear Sir,
I am not blind to the worth of the wonderful gift of Leaves of Grass. I find it the most extraordinary piece of wit and wisdom that America has yet contributed…I greet you at the beginning of a great career….
~Ralph Waldo Emerson

The rhythmic cadences of Leaves of Grass, America’s first epic poem, reflect the influence of the King James version of the Bible. Expressing the optimism of “manifest destiny” and the emerging importance of individual experience, Whitman addresses the world as a prophet of a new kind of poetry:

Have you reckon’d a thousand acres much? have you reckon’d the earth much?
Have you practis’d so long to learn to read?
Have you felt so proud to get at the meaning of poems?
Stop this day and night with me and you shall possess the origin of all poems,
You shall possess the good of the earth and sun, (there are millions of suns left,)
You shall no longer take things at second or third hand, nor look through the eyes of the dead, nor feed on the spectres in books,
You shall not look through my eyes either, nor take things from me,
You shall listen to all sides and filter them from your self.
~ Walt Whitman, Song of Myself

In 1862, shocked by the news that his brother George, a colonel in the Union Army, had been wounded, Whitman left New York for Washington, D.C., where he spent the remainder of the war working as a nurse in the field hospitals. Unlike most prominent writers of the period, Whitman witnessed first-hand the suffering of the war. Lincoln’s assassination had a profound impact on Whitman. From his grief came the greatest literary work of the Civil War period, the American elegy, When Lilacs Last in the Dooryard Bloom’d:

When lilacs last in the door-yard bloom’d,
And the great star early droop’d in the western sky in the night,
I mourn’d and yet shall mourn with ever-returning spring.
Ever-returning spring, trinity sure to me you bring;
Lilac blooming perennial, and drooping star in the west,
And thought of him I love…

During his years in Camden, Whitman continued to edit and expand Leaves of Grass. In addition to his poetry, Whitman published major prose works during these years: Specimen Days and Collect (1882) and November Boughs (1888). Whitman’s faithful companion during his final years and later his biographer, Horace Traubel, visited Whitman regularly and recorded with great detail the last years of the poet’s life. In 1891, Horace helped Whitman publish the ninth and final version of Leaves of Grass. This, with the annex of a collection of recent poems titled Good-bye My Fancy, was to be the definitive form of Whitman’s great work. Whitman died at his home on March 26, 1892. He was buried at Harleigh Cemetery in Camden.