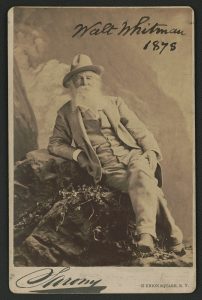 For Camden County History Month, the Walt Whitman House Historic Site, home of the “Good Gray Poet” will be hosting special “Walt Whitman’s Camden” tours that focus on the work that Whitman created while living in Camden, as well as the history of Camden in relation to the historic site. The tours will explore his diary jottings in Specimen Days and his ruminations on the growth of America in Democratic Vistas. The compilation volume Specimen Days and Collect was assembled during Whitman’s time in Camden and illustrates his experiences and opinions of his life’s work as well as his thoughts on and travels throughout Camden County.  These special tours at 11 am and 2pm are on a first-come, first-served basis on Fridays and Saturdays in October. 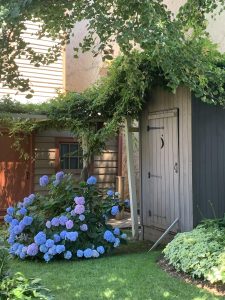 The garden at Whitman’s Camden home

Come join us to celebrate springtime and Walt! We will be celebrating Walt Whitman’s 203rd  birthday on Wednesday, May 25th, at 5pm in the garden of the Walt Whitman House at 328 Mickle/Martin Luther King Blvd. in Camden. This year’s event will include the awards ceremony for the winners of the Annual High School Poetry Contest of the Walt Whitman Association, and feature event speaker Maya J. Sorini. Sorini is a poet and med student who creates poetry as a reflection of the trauma and healing that she observes in her medical practice. We are looking forward to welcoming Sorini to our celebration.

The theme for this year’s poetry contest is “caring,” a fitting subject as we come off of the heels of the COVID-19 pandemic. Walt Whitman was a caregiver in the 19th century, volunteering as a nurse during the Civil War and working closely with the sick and injured soldiers in hospitals around Virginia and Washington, D.C. He ruminates on the practice of care and connection in his poems, and was not shy about describing the war-torn scenes that unraveled in front of him. In “The Wound-Dresser,” written in 1865 and published in the 1892 edition of Leaves of Grass, Whitman eloquently paints an image of the intimacy that care brought to an otherwise chaotic environment:

Bearing the bandages, water and sponge,
Straight and swift to my wounded I go,
Where they lie on the ground after the battle brought in,
Where their priceless blood reddens the grass the ground,
Or to the rows of the hospital tent, or under the roof’d hospital,
To the long rows of cots up and down each side I return,
To each and all one after another I draw near, not one do I miss,
An attendant follows holding a tray, he carries a refuse pail,
Soon to be fill’d with clotted rags and blood, emptied, and fill’d
again.
I onward go, I stop,
With hinged knees and steady hand to dress wounds,
I am firm with each, the pangs are sharp yet unavoidable,
One turns to me his appealing eyes—poor boy! I never knew
you,
Yet I think I could not refuse this moment to die for you, if that
would save you.

Whitman’s endless capacity for empathy is honorable, and his time spent in the Civil War hospital tents helped to shape some of his most impactful poetry. But his service is also a model for the present on the importance of reaching out and helping our neighbors and friends.

Nothing Else but Miracles: Paul Stankard’s Glasswork & the Spirit of Walt Whitman 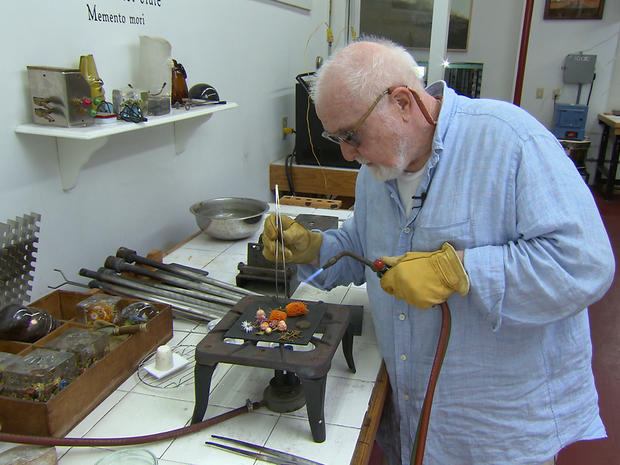 Tuesday, November 12, 6:00 pm
Stedman Gallery, Rutgers-Camden Center for the Arts
Join us for a special evening with internationally acclaimed artist, Paul Stankard. As a pioneer in the studio glass movement, Stankard is considered a living master in the art of the paperweight, and his work is represented in more than 60 museums around the world. This program, in conjunction with our current exhibition, Democratic Vistas: Whitman, Body and Soul, will include an intimate interview with the artist exploring his roots in glass as well as the influence of Walt Whitman’s words and wisdom on his work. Experience the exhibition in the Stedman Gallery, and stay for a light reception after the presentation.
Moderated by Curator Dr. Tyler Hoffman 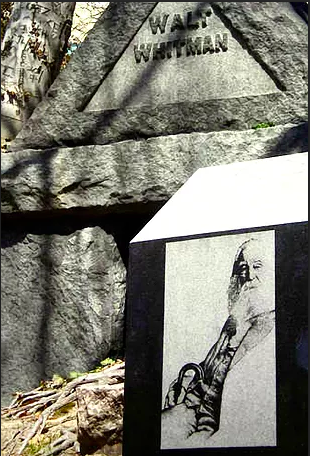 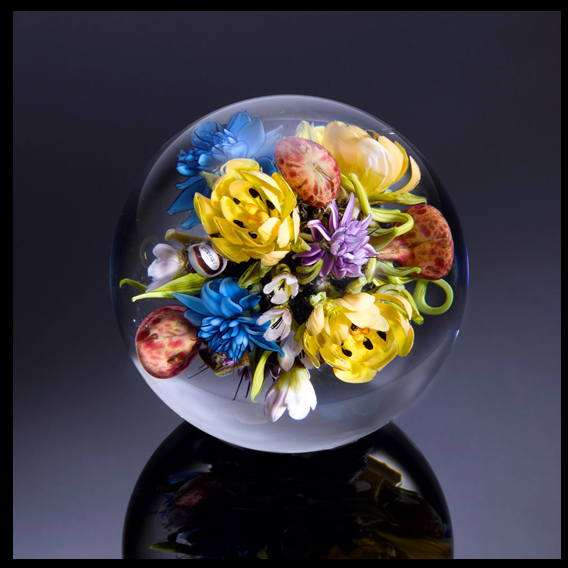 Rutgers Camden will be hosting “Democratic Vistas: Whitman Body and Soul,” a survey of contemporary art relating to the life and work of Walt Whitman. The exhibition will include work by a variety of artists from all over the country, including sculptor John Giannotti and glass artist Paul Stankard, reflecting on his view of a changing America and dreams for an egalitarian society. The opening of the exhibition and the annual birthday celebration will take place on May 29th at 5pm at the Rutgers Stedman gallery. We hope to see you all there!

Meet the artists whose creations celebrate the 200th anniversary of Walt Whitman’s birth in the exhibition Democratic Vistas: Whitman, Body and Soul, currently on display at the Stedman Gallery. Light refreshments will be provided. For more information, contact Nancy Maguire. Sponsored by the Center for the Arts.

Whitman at 200 – Celebrating the Bicentennial of the Good Gray Poet

The Walt Whitman House Historic Site and the Walt Whitman Association are proud to announce that preparations are underway for the celebration of Walt Whitman’s 200th birthday! We will be working in conjunction with Rutgers University, Camden County Historical Society, and The Whitman-Stafford House to create programming surrounding Whitman’s life in Camden and the legacy he created while living in the house at 328 Mickle Street.

The Whitman House will be hosting events and special tours that focus on the work that Whitman created while living in Camden, as well as the history of Camden in relation to the historic site. We will also be hosting the celebration of Whitman’s 200th year on the Camden Campus of Rutgers University on May 29th and in conjunction with Camden City, holding a special proclamation on May 31st out front of the historic house.  See below for more details. 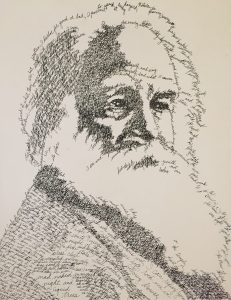 On May 29th the Walt Whitman Association will be ringing in the 200th birthday of Walt Whitman with our time-honored Annual Walt Whitman Birthday Celebration and the regional Walt Whitman High School Poetry Contest awards ceremony. This year’s reception and recitation of the winning poems will be held at the Rutgers University-Camden Stedman Gallery, and guests will be joined by Walt himself, portrayed by historian Darrel Ford. The celebration begins at 5pm and will feature poetry readings, cake, and punch. This will also coincide with the opening of the Rutgers’ exhibition Democratic Vistas: Whitman Body and Soul, a contemporary survey of art inspired by the Good Gray Poet. We look forward to seeing you there! 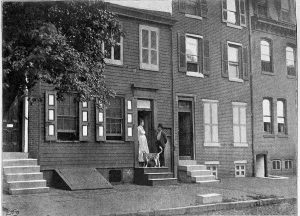 On May 31st the City of Camden along with the Walt Whitman House Historic Site will kick-off Walt Whitman’s 200th Birthday Celebration in Camden, NJ.  The event will take place in front of Whitman’s former home at 328 Mickle/Martin Luther King Jr. Blvd. and will celebrate the achievements of the world-renowned poet.  The program, which will focus on Whitman’s time in Camden as well as the history of Camden in relation to the historic site, will include guest speakers, a poetry reading, and musical selections, along with a ceremonial proclamation presentation by Camden Mayor Frank Moran commemorating Whitman’s 200th Birthday.

How Sweet the Silent Backward Tracings! Preserving the Memory of America’s Good Gray Poet Through Materials, Meetings, and More 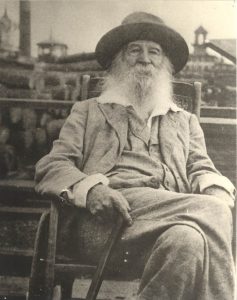 Special Exhibit by the Mid-Atlantic Regional Center for the Humanities

The Memory of Walt Whitman lives on in the 21st century through various venues: annual celebrations, living history actors, academic journals, sculptures in his likeness, and more.  This exhibition, in conjunction with the 200th anniversary of Walt Whitman’s birth, will examine the events, publications, artworks, and other forms of media through which the memory of the Good Gray Poet is immortalized – many of which take place right here in Camden.

Opening Reception: Out of the Cradle Endlessly Rocking 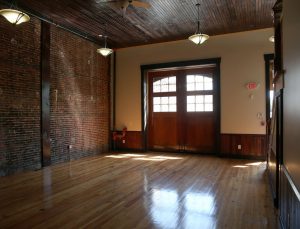 This exhibition of works by artist Joe Plageman features paintings depicting each line of Whitman’s poem, “Out of the Cradle Endlessly Rocking” along with other works. The opening reception on May 19 will feature a live reading of the poem while viewing images of the corresponding paintings.

Walt Whitman in the Civil War

On Monday April 1, 2019 there will be a special presentation by Joseph F. Wilson on Walt Whitman and his experiences during the Civil War. Though never participating in combat, Whitman contributed greatly to the war effort through his time visiting war hospitals and caring for wounded soldiers. Please join us to learn more about Whitman and the time he spent with the soldiers, and how both Whitman and the soldiers’ lives changed through his contributions. The presentation will begin at 7pm in the Civic Center at Camden County Community College in Blackwood, NJ. There is no cost for this event, and we hope to see you there! 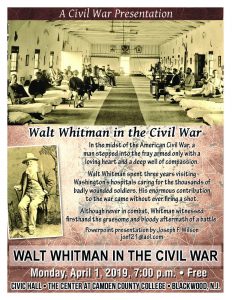 Walt Whitman: Poet of the Future Opening Program and Reception 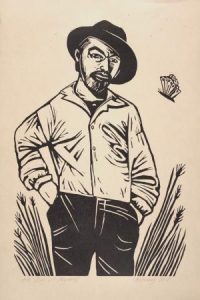 Image credit: Song of Myself, by Barbard Henry, linocut (2018)

The exhibition Poet of the Future will celebrate the bicentennial of the birth of Walt Whitman by sharing rare books and manuscripts from Rutgers University Libraries’ collections. To mark the opening, Karen Karbiener, a Whitman scholar based at New York University, will talk about the portrait in the original edition of Leaves of Grass, and Barbara Henry, printer and poet, will talk about how Whitman’s training as a printer influenced his work as a poet. The program will be followed by a reception.

The Walt Whitman Association has been celebrating the life and legacy of the great poet, Walt Whitman for over 120 years with an annual birthday party in May at his home on Mickle Street (today’s Mickle/Martin Luther King Jr. Boulevard). This year’s celebration was held at the Walt Whitman House on May 30th at 5 pm, and featured the winners of the Walt Whitman Association’s Annual High School Poetry Contest, who recited their winning entries. The theme for this year’s Poetry Contest is “Looking to the Future.” Students were invited to look forward, imagining a future that may pertain to themselves, their community, our nation, and/or humanity as a whole. Students were encouraged to review Whitman’s musings on our shared humanity and future generations, including poems such as “Crossing Brooklyn Ferry,” “Poems to Come,” and “Song of Myself.”

Our guest speaker this year was Camden City Mayor Francisco “Frank” Moran, who presented the Whitman House with a Proclamation of the 199th birthday from the City of Camden. It’s an exciting time in Camden-thank you for coming out to celebrate Walt!

For more information on the celebration and the poetry contest, please visit our Poetry Contest page. 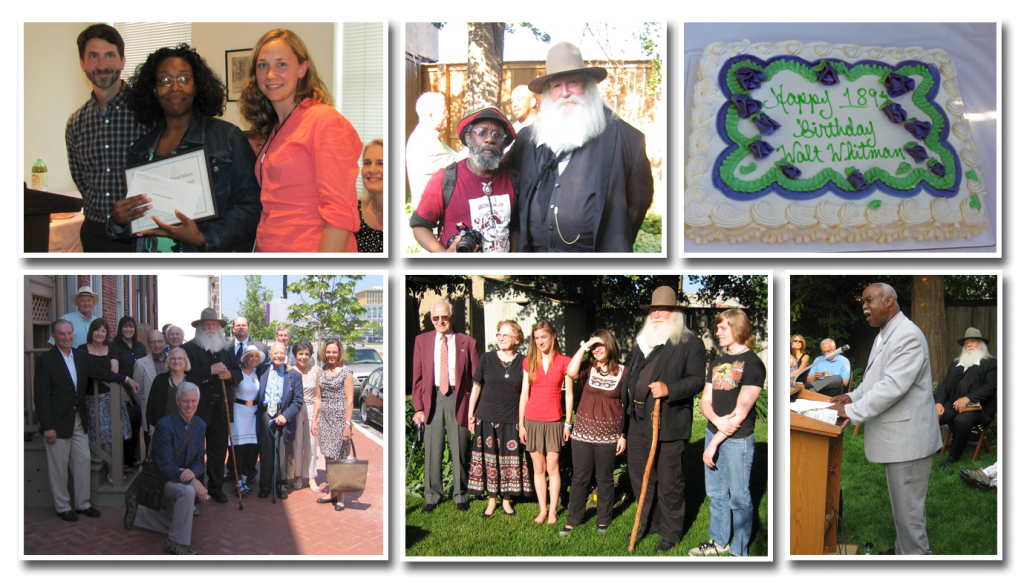 Come experience where the Good Gray Poet wandered the banks of his beloved Timber Creek and enjoy the beauty of Laurel Springs!

The Stafford Farmhouse in Laurel Springs, New Jersey was a site often visited by Walt Whitman, who developed a close friendship with the Stafford family, after the Civil War. As chronicled in his book of essays, Specimen Days and Collect, Walt spent many happy summer and early autumn days at the Laurel Springs homestead, which provided him a respite from the excitement and cacophony of living on a loud and bustling street in Camden.

THERE IS NO ENTRANCE FEE FOR THE FESTIVAL.

-Downtown Train Station will be open for visitation and information, with nearby parking and lunch spots. 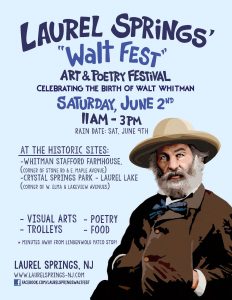