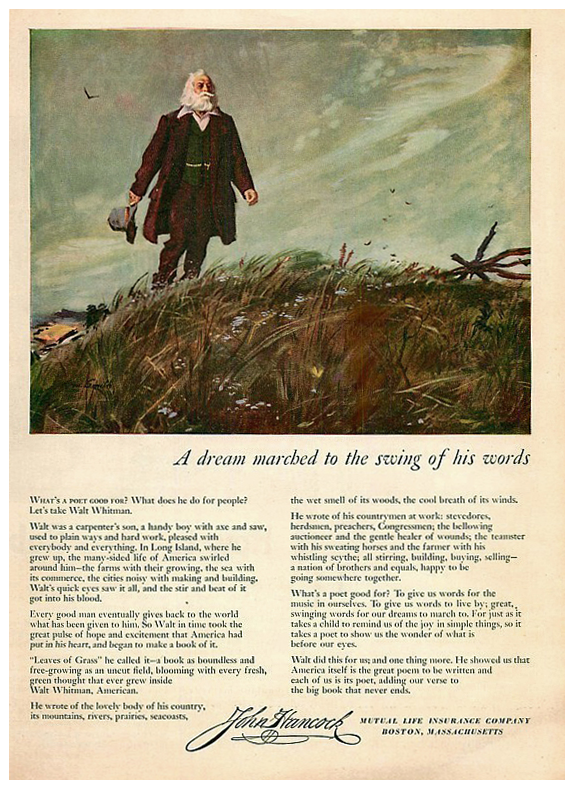 Walt Whitman’s life story and likeness has been used by a number of businesses as a key part of their marketing. From cigars to beer to life insurance, the use of Whitman’s persona has been crucial in helping sell products that insure their audience that buying their product will help them achieve a full American lifestyle, much like the one that Whitman led. Of course, there is a big difference between the ideal American lifestyle in the 19th century and that of the 20th century, but many aspects of Whitman’s legacy – his individuality, his connection to the natural world, and, of course, his patriotism – had great appeal to the American people in the post-war cultural landscape.

The John Hancock Life Insurance historical campaign is one of the most compelling examples of the use of Whitman for advertising purposes. The campaign itself is a series, which features a wide range of popular American historical figures and events. They usually ran in large format magazines and publications, such as Life, or The Saturday Evening Post, and were printed as full-page advertisements. The layout of the ad included an illustration of the figure or event in question, and each advertisement was drawn a different American artist. The illustrations worked to catch the eye of the reader, and were lauded by many statesmen and advertising groups for the high quality of the drawings. Ben Stahl, a staff member at McCann Erickson, the advertising agency that conceived of the ads, used the series as an argument for the place of high art in advertisement, claiming that “everything which has the power to move people has a place in advertising’s kit of tools.” These advertisements, which have been included in a number of historical exhibitions around the U.S., such as the “Faces of Freedom” exhibit from 1962, ran for more than a decade, stirring U.S. readers throughout the 1940’s and 1950’s. By far, one of the most powerful spreads of the series was the one that featured Walt Whitman.

Drawn by illustrator William A. Smith, with copy written by McCann-Erickson employee Louis Redmond, the Whitman advertisement resonated with readers and critics alike. In 1951, it was awarded the “Most read life insurance ad of 1951,” which can be attributed to both the illustration and the written story. Both elements of the advertisement are equally compelling, with the image of Whitman alone amongst blue skies and rolling hills drawing the readers eye down to the text, which begins boldly stating –

A dream marched to the swing of his words

What’s a poet good for? What does he do for people? Let’s take Walt Whitman. .

Walt was a carpenter’s son, a handy boy with an axe and saw, used to plain ways and hard work, pleased with everybody and everything. In Long Island, where he grew up, the many-sided life of America swirled around him – the farms with their growing, the sea with its commerce, the cities noisy with making and building. Walt’s quick eyes saw it all, and the stir and beat of it got into his blood.

Every good man eventually gives back to the world what has been given to him. So Walt in time took the great pulse of hope and excitement that America had put in his heart, and began to make a book of it. “Leaves of Grass” he called it – a book as boundless and free-growing as an uncut field, blooming with every fresh green though that ever grew inside Walt Whitman, American.

He wrote of the lovely body of his country, its mountains, rivers, prairies, seacoasts, the wet smell of its woods, the cool breath of its winds.

He wrote of his countrymen at work: stevedores, herdsmen, preachers, Congressmen; the bellowing auctioneer and the gentle healer of wounds; the teamster whistling scythe; all stirring, building, buying, selling – a nation of brothers and equals, happy to be going somewhere together.

Walt did this for us; and one thing more. He showed us that America itself is the great poem to be written and each of us is its poet, adding our verse to the big book that never ends.

The text itself is Whitman-esque in many ways – poetic, descriptive, almost rhythmic, reflecting the style of the late poet. The effect of both writer and artist using their subject to help develop their work is powerful, and is perhaps why the advertisement was so widely read and well-received. It is, perhaps, one of the best ads of the entire folk series.

With the folk campaign, John Hancock Life Insurance created an advertisement that mirrored the quality of the insurance that they were selling, standing out among other rival full page spreads. Not only were these top-notch ads informative and compelling, they were also impeccably crafted by some of the great creative minds of the 40’s and 50’s. And although the heroic American figures at the center of the campaign helped to catch the American imagination, the genius and creativity of the team working on the ads is really what makes the series stand out. Though rooted in historical events and stories, the illustrations and copy of these campaigns showcased the skills and talents of modern American artists and cultural producers. Perhaps the power of the use of Walt Whitman for advertising is not in the idea of the man he was, but rather how his work continues to inspire students and readers to this day.